Sébastien has been a sportsman at heart from the earliest days. Following his father’s steps – a former gymnast champion – Sébastien started practising gymnastics only aged 3. He quickly entered competition and, in a matter of 12 years, forged himself a solid track record: four-time Alsatian champion, once champion of the French Grand East, and fifth in the French championship. 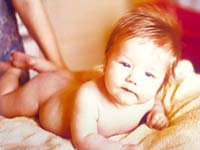 Simultaneously, he did not miss an opportunity to ‘race’: always on a tricycle, bike or a rented mini-motorcycle during holiday times… The only place he wants to be is at the front.
Honouring his parent-teachers, Sébastien followed an exemplary education until he got sidetracked by his passion; running into teenager’s competitions with his moped every week. ‘The Roundabout’s Special’, ‘Vines Grand Prix’… Sébastien and his school-mates made up with some daring challenges – to the delight of their right wrist and the misfortune of the residents! Sébastien also took part in some official cyclo-cross competitions where he stands out. His competitive spirit shows up.

Sebastian left high school. He wanted something concrete and found it when he graduated as a construction electrician. As soon as he starts working, his entire income gets absorbed by the object of his dreams: a Renault 5 GT Turbo. Rubber tires died after 2,500 km and his driving license is more often found at the station than in his pocket! 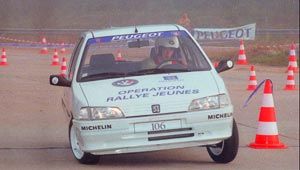 His piloting apprenticeship began and soon revealed innate qualities. Sébastien tortured some GTIs before reading about the French ‘Rallye Jeune’ organisation which aims to reveal young talents. Aged 21, Sébastien scraped together to get by the 100 FR needed for registration. He won the regional selection and then the final of Castellet, but his closest competitor – Nicolas Bernardi – is handed the victory. Sébastien failed again in 1996’s finals. No matter: he is confident in his speed and abilities, only finances are missing to get started.

Together with Rémi Mammosser and Dominique Heintz, the young man’s drive and motivation did not go unnoticed. Passionate drivers, Dominique and Rémi welcome Sébastien to their team “Ambition Sport Auto” with a precise goal: give a leg up to the bright pilot. A crucial encounter… 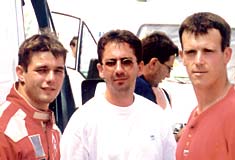 1997 – Ambition Sport Auto seeks funding and finds a car. Dominique calls Sebastian: “You will take part in a regional race in fifteen days and I will be your co-pilot”. A new duo is born! First rally, first victory. “Either he is crazy or he is a genius” says Dominique who leaves his position as co-driver, allowing Sebastian to scare a new co-pilot.
Sébastien wins four races in the “1300” category of Ambition Sport Auto’s one-off regional level with a 106 model, before jumping two levels up and competing in the “1600” category where he excelled. These six races led to him being named “Best Hope of the Year” by the French magazine Echappement.
Same season, the end of the Cévennes rally gives shape to a new duo: Loeb-Elena.
1998 – Ambition Sport Auto tackled the Saxo Kit Car Trophy. Sébastien wins all the events he finishes, but the lesson is painful: two cars destroyed and further deteriorating finances.
Sébastien won the trophy with flying colours in 1999. Still an amateur, he impresses observers but specifically his competitors … Therefore, French Federation of Automobile Sport FFSA offers Sébastien Loeb a seat in the national team where he gets to know the international competition over three rallies. Sébastien departs in Rally Catalunya, but wins his category in Corsica and San-Remo.
Early 2000, despite short finances, Ambition Sport Auto hires Sébastien for a France Championship on dirt roads with a Saxo Kit Car rented for the occasion. Appraisal: victory in a two-wheel-drive model, and especially, entrance of Citroën who finances the second event, only to get closer to the acclaimed driver. New victory and a big step forward: two patrons of the rally, Jean-Pierre Champeau and Frédéric Schmitt, along with Citroën, take over the rest of the programme. Sébastien becomes French Champion.

A taste of WRC

Sébastien tries a WRC (Seat model) for the first time after the Rally of Catalunya 1999 for Echappement magazine. In just a few laps, he catches up with the licensed driver. 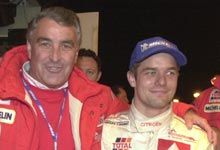 Thanks to Didier Auriol’s sponsorship, FFSA offers Sébastien two international competitions in 2000: San-Remo and Corsica, driving a Corolla WRC. He finishes among the top 10 in both events. Competitors will soon have to face the truth, a serious WRC candidate is right on the doorstep.
Sébastien seals his future during the Rallye du Var 2000. Guy Fréquelin, who seriously followed the conquest of the dirt roads championship title, hands a Xsara Kit Car to Sébastien. “A star is born” said Fréquelin after Sébastien won the Var hands down. Later that day, Fréquelin offered him an official contract to run the France Championship. This is it: Sébastien is now a professional pilot.

Pillar of the Citroën team, Sébastien does not get bored. 2001 is busy: the French Rally Championship in a Xsara and the Super 1600 in Saxo. The Loeb-Elena duo wins both, scoring five victories in the five Super 1600 competitions.
Guy Fréquelin still pushes his talented driver and Sébastien goes on with a Xsara WRC for the Sanremo Rallye. He signs off his first scratch times on the international level, threatening the local master himself Gilles Panizzi, before ending second. It is a thunderclap: never has a beginner at this level made such a dramatic entrance in the competition… 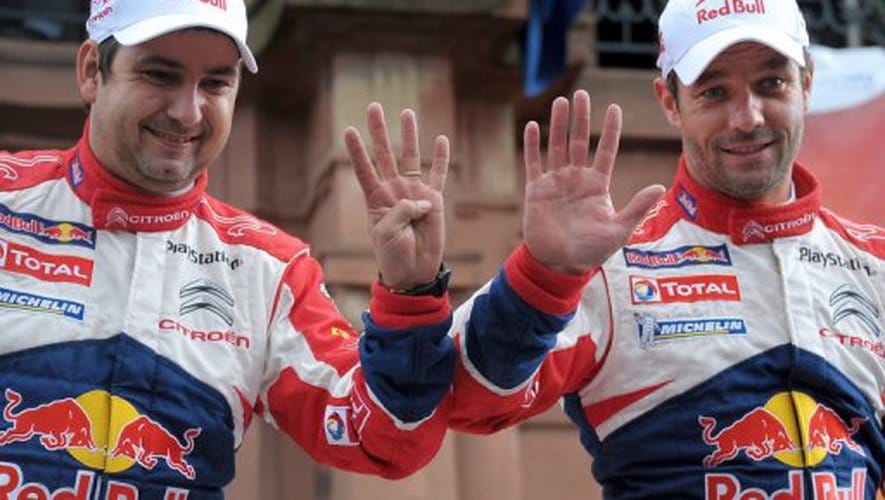 Sébastien naturally joins the WRC crew for the 2002 season. It is another apprenticeship where he only takes part in seven events. Only losing by forfeit at Monte-Carlo, he wins the Deutschland Rallye with ease, establishing a strong presence.
2003 marks his first complete season in the international championship. In the Citroën team with Dominique Heintz as an opener, Sébastien has exceptional teammates Carlos Sainz and Colin McRae. Sébastien wins three rallies (Monte-Carlo, Deutschland, Sanremo), collects podiums but fails in the conquest of the highest qualification by just one point. No one can tell if Sébastien could have come back on Petter Solberg at the end of the Wales Rallye Great Britain… but what a year! For his first full season, he earns the title “Champion of Champions” at the final of the Race of Champions with Citroën’s lead in the constructor championship, which won’t be the last as the team Loeb-Elena will lead during over nine years between, 2004 and 2012.

Nine times world champion, Sébastien retires from the discipline in 2013 without electing a candidate for his succession. He starts a successful career change in the circuit racing: first in FIA GT Series then in WTCC in 2014 and 2015 while continuing his collaboration with Citroën Racing. This relationship suddenly ends in 2015, after a series of fifteen successful years. He is consequently transferred to Peugeot Sport’s rallye-raid and rallycross programmes. 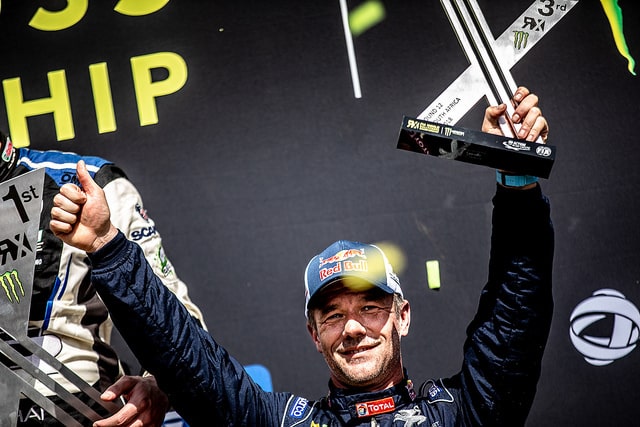 From 2016, Sébastien takes part in the Dakar Rally and the WRX Rallycross World Championship. That’s three Dakar rallies where he swings between newcomer and expert along with three not highly successful rallycross seasons driving an undeveloped vehicle and his team’s sudden withdrawal in 2018.
2018 is Sébastien’s come back in WRC, taking part in three rallies driving a Citroën DS3WRC. He wins the Catalunya Rallye and improves his ultimate WRC record with 79 victories.
The end of his engagement with PSA Group and this last victory give him a taste of come back. He then decides to engage with Hyundai for two years on partial WRC programmes (6 annual races). 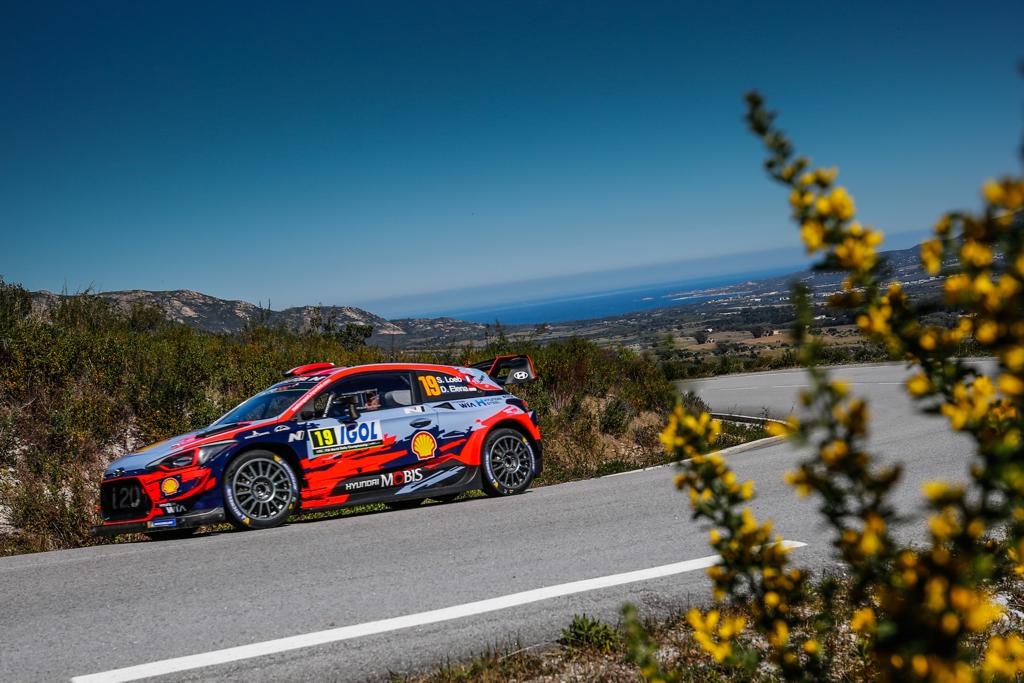 After a late decision, Sébastien takes part in the Dakar Rally in January 2019, this time not with Peugeot Sport who left the discipline, but as a private driver. With his lifelong co-pilot Daniel Elena, he achieves one of his best Dakar results with third place on the podium.
Peugeot Sport’s withdrawal from rallycross world championship leaves Sébastien on the sidelines for the 2019 season. On top of this, the Citroën Racing team with who he won nine rallycross championships decides to hire only two cars for the season. Sébastien is unable to achieve as much as during 2018 nor complete his programme.
He signs with Hyundai Motorsport to drive a WRC for the next two years (2019 and 2020). He competes in six rallies in 2019 and Dani Sordo takes the reins for the next eight rallies.
Resourceful, Sébastien has launched this new WRC season with a view to the future and the lasting ambition to reach the leading position. After twenty years of experience, Sébastien finds himself with a new team for the first time. Sébastien appreciates change as a new lease of life while keeping his distinctive sense of competition.